The Global Importance of Phosphate: Phosphorus, in its oxidized form, as phosphate, is a key ingredient in fertilizers used to sustain high crop yields and has no substitute in food production. The application of phosphate fertilizer is a critical feature in maintaining modern agriculture. Yet, phosphate rock ore, the main source of phosphorus is being mined at an unsustainable rate. Active reserves of phosphate ore are estimated to last 100 to 150 more years.

In anticipation of what might be a catastrophic impact on global food production there is an on-going discussion about how phosphorus might be recovered from human waste in a form where it can be used as a fertilizer. An average human adult excretes 0.75 kg of phosphorus per year most of which is flushed away as waste. Opportunities thus exist to recover large amounts of this valuable resource from an easily accessible source.

The removal of excess phosphorus from wastewater has additional advantages by reducing pollution in the environment. Less phosphorus in treated waste may help stem the one way flow of phosphorus into lakes and oceans where it is used by algae as a nutrient source.

One approach for removing phosphorus from wastewater is to precipitate it in the form of struvite (magnesium ammonium phosphate), which can be used as a fertilizer in modern agriculture. It is not soluble in water so does not pollute the environment as run-off from the land and has fewer heavy metal contaminants than phosphorus from rock ore.

Struvite precipitation can be a problem in wastewater treatment plants where it clogs pipes and other equipment, so its removal is advantageous for efficient plant operations. Removing phosphorus in the form of struvite using synthetic methods requires carefully controlled conditions for optimal for ion saturation, nucleation, and crystal growth. Biomineralization methods requiring less stringent conditions would be easier to manage and potentially have fewer costs.

Precipitation of Phosphorus by Bacteria: We have isolated Pseudomonas bacteria from hydrocarbon-contaminated niches at a local site, which have the ability to form struvite crystals in culture. Unlike synthetic struvite production, the bacteria do not require controlled amounts of phosphorus in the water for the struvite crystals to form. If they are given sufficient nutrient sources to grow, the bacteria will form crystals.  We are studying the crystal-forming mechanisms used by the bacteria so that we can understand how to control the process.

Crystals are formed inside the biofilm

High-resolution imaging reveals the crystals are embedded in the bacterial biofilms. 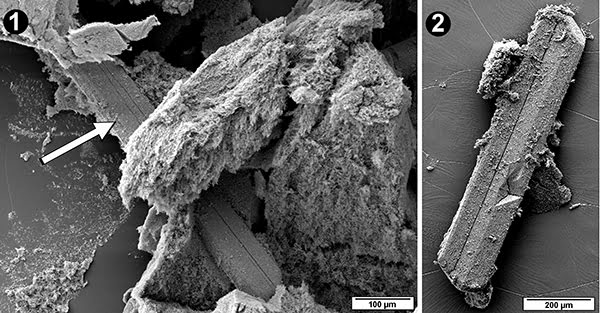 (A) Pseudomonas bacteria and biofilm material with embedded crystal (arrow).

(B) A partially isolated crystal observed by SEM

Crystals in the cultures can be separated from the biofilm material by washing in chloroform. Crystals isolated this way are heterogeneous in size and shape, and can be easily imaged by light microscopy.

Crystals formed in the Pseudomonas biofilms can be isolated from the biological material by washing with chloroform followed by gentle centrifugation. Light microscopy images of the purified crystals show crystals heterogeneous in size and morphology. Scale bars = 20 µm.

X-ray microanalysis using energy dispersive spectroscopy demonstrates an increased concentration of magnesium and phosphorus in the crystals when compared with the biofilm material.